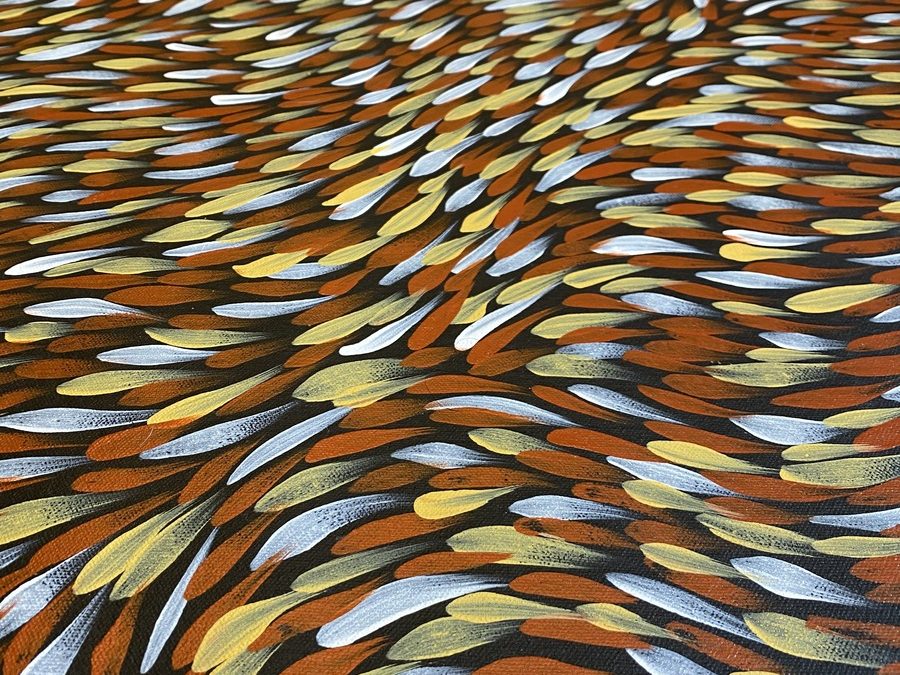 The Utopia community in the Central Desert of the Northern Territory was so named by German settlers in the early 1920’s. The country around that area is home to Anmatyerre and Alyawarr speakers who were at times forced into centralised communities as the pastoralists moved to work the land using western farming methods. Many of the stories now painted on canvas are visual representations of generations of oral history used to communicate knowledge of how to look after the land and follow social and spiritual systems.

The birth of art on canvas had a very different trajectory in this area than in other communities in the desert. In the early 1970’s there were several projects run in the community, encouraging would be artists to learn the art of batik. The result was a series of work that travelled all over the world with major exhibitions in the US, UK and Europe. The technique requires boiling of cloth and dye, a smelly and heavy process not well suited to the desert conditions. After the rise to prominence of the western desert artists painting with acrylics on canvas many of the artists felt they could tell their stories in this medium more easily and with a greater range of colours.

Artists such as Emily Kngwarreye, Kathleen Petyarre, Gloria Petyarre and Minnie Pwerle painted stunning representations of the bush medicine stories and associated body paint. The developed unique, vibrant colour palates that filled the canvas. Gloria’s paintings feature the mulga leaf while Minnie Pwerle’s paintings have the bush melon or the designs painted on women’s bodies for the ceremony. Kathleen Petyarre’s mountain devil lizard paintings feature both the tracks that the little lizard makes on the sand and the paths women take while collecting food and supplies for medicine.

The paintings are aerial veiw of the land and and so are able to be hung in any format on the wall. The subjects of the painting are often painted from the middle of the canvas, working outwards towards the edges, creating paintings that make sense to the viewer no matter which way they are installed.